Forget about Tomb Raider, Minecraft and Fortnite, go old school and dig out some board games. Chess, checkers and backgammon are great games for two players but here we’ll explore group board games that have been around for a while and still have a lot to offer. They provide the opportunity to strategize, reason, and think on your feet as well as learn the more obvious lessons about rules, competition and good sportsmanship. Playing a board game with a group is not only enjoyable, it will help to build social skills like effective communication and patience.

Was it Professor Plum in the library with the candlestick? Or could it have been Colonol Mustard in the kitchen with the gun? For those of you who don’t remember playing this classic game as a child, the object of it is to work out, through a process of elimination, who has committed a murder, what the murder weapon was and where the murder took place.

It’s great fun but also teaches deductive logic and reasoning. In fact, Clue has been used to teach propositional logic and computer programming at college level.

The classic game of real estate, it teaches negotiating, problem solving and analytical skills, as well as financial principles such as investing. Kids love the feeling of managing their wealth – and handling all those bank notes. On a more rudimentary level, this is a fun way to practise math. This is essential training for any ruthless property tycoon in the making!

Note the more recent introduction of a card version of Monopoly. It means games are shorter and more fast paced, and also more mobile.

Apart from the obvious benefits of improving your spelling and vocabulary, this ever-popular word game trains players to think strategically and also practice mental arithmetic. Players must create words using their assigned letter tiles, each of which has a value. Depending on where the player places his word on the board, squares may also affect the final score of a word – there may be double or triple word or double letter scores to take into consideration.

The aim is world domination and the elimination of your opponents in the process. The board depicts a map of six continents divided into 42 territories. By rolling the dice, players move armies around the board and occupy different territories with the aim of conquering whole continents. All the while they must fortify the borders of existing territories and defend against attack with the ultimate goal of controlling the board and taking over the world.

The game requires players to think strategically and anticipate their opponents’ game plans. It develops the ability to think logically and also to make decisions and understand that every move you make will have a consequence.

Note that you generally can’t conquer the world in an hour – this game requires commitment. You could play for a couple of hours or as long as a few days!

For days when they are off board games, there are camps to engage! Click here to check out ongoing camps. 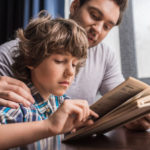